Ok. So most of you might have figured out that I had sweet, sweet dreams on Tuesday night. I continue to get goosebumps when the reality of the election and all that it encompassed sinks in. And it happens in little pieces. A snippet of news. A glance at a leftover yard sign. The notion that my children will see someone who is dynamic and intelligent and brave and strong leading this country.

And then some moron hitting on me at the Girl Scout meeting tells me he's disappointed that he got elected and that Obama refuses to put his hand over his heart during the pledge because of his religion brings me back to the reality of living in Kansas with a bunch of backwards-ass idiots. And that I might need to ease back on my friendly-to-everyone demeanor. Because the last thing I want 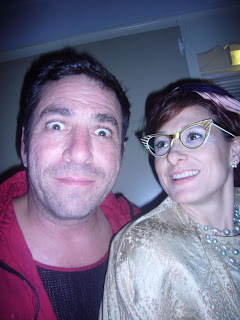 And I've been trying to think of all of the blog-worthy events that have happened that I've not had a chance to tell you. And here's one of many. I'll pass on the gory details of too much Scotch and photos that have been sworn to secrecy and I'll just post a pic of MySpace Steve and me at his ex-wife's Halloween party (they're my divorce role models). I had a blast. Though I'm not sure at what I'm gazing.

Posted by Some kind of Jennifer at 9:48 PM

Easy with the NASCAR lovin' digs--you can have both, you know...N and C both know what NPR is--and faithfully listen to "Car Talk" on Saturday mornings...and are quite politically aware for being 11 and 9 :o)

Some kind of Jennifer said...

Rest assured, Casey, that I respect and love your children. They are delightful young gentlemen who will someday make wonderful husbands. At the same time, however, I have no interest in dating them. See how nicely that all works out?

you look a bit like Debra Messing in that pic! and that is a good thing!
I will tell you the story about my neighbors if you want to here it. it scares me! They scare me and have children they are passing such lovely ideas to.
claudia