Only YOU Can Prevent Syrup Abuse

I'm picturing Smokey the Bear pointing his index finger at you while tapping a maple for sap.

A couple of nights ago, Em put in a special request for waffles the following morning. I couldn't come up with a valid excuse to avoid the task, so early Friday, I thumbed through a couple of cookbooks and picked a new recipe. The twist on these was one I've used in the past. Sweeten the waffles (or pancakes) with maple syrup (oh please-for-the-love-of-baked-goods, don't consider anything but the real stuff). I've had varying degrees of luck with the last few recipes, as well as my dear iron. Sure, it's 50 years old, but it's still got some kick left. Anyway, I made said waffles and by the second bite, they had been declared The Best Ever. I'm happy to take each culinary victory as it comes. Even in the shape of a grid.

That afternoon, the kids called me at work asking if there were leftovers. They enjoyed the last two and promptly begged for another batch for Saturday. So this morning (after I got my arse kicked at spinning class. Woot!), I doubled my quantity. As of now, I have less than a dozen small waffles that will potentially hit the freezer, but by the afternoon, that number might drop significantly. Even if they nosh all afternoon long, the best part is that there will be no drippy syrup mess about my kitchen. They are all completely satisfied to eat them just as they are.

And on that note, I return to my food blogging ways and pass this gem to you. . . 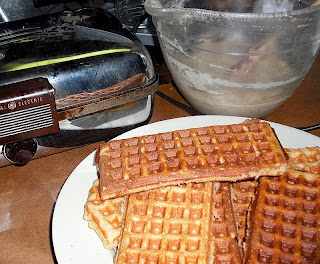 Preheat the waffle iron. In a large bowl, stir together flour, powder and salt. In another bowl, combine milk, syrup, oil and vanilla. Stir the maple mixture into the dry ingredients until well combines. In a clean medium bowl, beat the egg whites until stiff peaks form. Fold whites into batter. Grease waffle iron and spread batter into it. Cook until the iron no longer steams (about five minutes) or until the waffle is browned. Repeat with the remaining batter.

Sounds dreamy...we'll have to try it!