Though it was not advertised as such, I hosted a 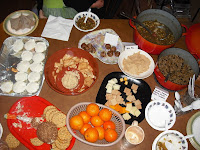 delightful vegan potluck last night. Turnout was slim, yet perfect. My calculations have 16 folks in attendance (eight of them kids) and a lovely array of plant-based foods. I made a Middle Eastern Barley Lentil & Rice casserole, Split Pea-Corn Tortilla soup and Angel Delights. The Perkins brought Mushroom Spinach loaf from Eden Alley's new cookbook and peanut butter chocolate chip cookies from the same source as well as a "Cheeze" ball. Others brought hummus, clementines and Hostess Treat Claudia, in keeping with her name, naturally brought cupcakes. 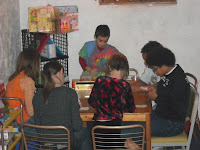 Adults enjoyed a few hours of conversation beyond our usual "make your bed" and "because I said so" rhetoric. The kids found themselves enraptured by a game of Apples to Apples and I'm pretty sure there was a rousing pillow fight on the sidelines. Have I told
you how much I love my basement?

In keeping with my mantra, no one went hungry under my watch. Even children reluctant to try new foods managed to fill up on more than just sweets. And my loving little house got its friend fix. Count on another potluck in a couple of months. Perhaps a theme this time...items starting with the letter B? square foods? or all dishes must rhyme with your name? Hmmm. I might have to work on the theme...

Posted by Some kind of Jennifer at 9:38 AM

Lovely party! The kids had a blast. Let's not make it as long between times we see you. I would love your recipe for the split-pea corn tortilla soup. It was delightful and I would love to recreate it.

A good time was had by all! But then I can't think of a time when with you I haven't had a good time.
But no pressure!
Hostess