Whatever Floats Your Boat...

Sure, school was a great time. A wonderful stepping out of my comfort zone, a giant leap toward my future aspirations, a challenge beyond my expectations, and a big fat A in each of my classes to jump start my return to college life. But I wasn't going to settle for just that. I had to snag new friends too. One in particular, Laurie, with a zest for life like no one I know, invited the kids and I to her family's place at the Lake of the Ozarks to give our otherwise school-full summer a nice exclamation point.

As we were wrapping up the semester, she reaffirmed her welcome and we made plans to head lakeside the following week. I packed a few things, grabbed the kids from Martin and we headed out on a two-day fun-fest.

None too shy of three dozen, are-we-there-yets, we arrived at the lake and stepped into a new world. Laurie explained that there were only two rules: that kids must always have a life jacket once on the dock, and that we must have fun. My little ones started playing in the water immediately while Laurie readied the boat for a quick spin.

Audrey was not a fan of the boat ride initially, and was nothing shy of terrified when Laurie (aka Joy Agent 007) encouraged Isaac and then Emily to take to the driver's seat. She returned to the helm, slowed then stopped, pointed at a cliff and said to me, "Do you want to jump?" I have no idea who was controlling me at the time, but I answered "yes," hopped into the lake, swam to the the shore and began my ascent to the thirty foot high plateau. Then I realized how crazy I must have been. It took more than a minute and several deep breaths before I reluctantly stepped off the ledge, ignoring Laurie's careful instructions for a safe landing. And just so you know, water can leave a nasty bruise when improperly handled.

After that, we headed to bar in our swimsuits and barefeet (the kids were beside themselves in shock) for a deep-fried dinner then back to the house, where we built a campfire, made s'mores, lit fireworks and shared general joy.

The next morning...another boat ride, tubing, (got my first black eye from that!) more swimming, jet-ski rides, and general getting-away-from-it-all bliss. My Three Little Diggs had a rip-roaring time. Their summer under my watch had consisted mostly of quizzing me on anatomy terms and (im)patiently awaiting their turn at the computer, so this was a treat far beyond their expectations. They wrapped evening number two with board games, snacks and soda. (It's vacation...even I can loosen up and allow high fructose corn syrup now and then.)

The next morning we had to be on our merry way, but not before Joy Agent 007's cousin set up poles with lures and took the kids to the dock. (Favorite quote of the trip...Austin: "Isaac, do you like to fish?" Isaac: "I like to catch fish.")

The drive home included fewer are-we-there-yets and more that-was-awesomes. Before Joy Agent 007 had closed the car door to return to her home, the kids were asking about the next time they'd see her. She's an amazing mother, optimist and fabulous role model for me. 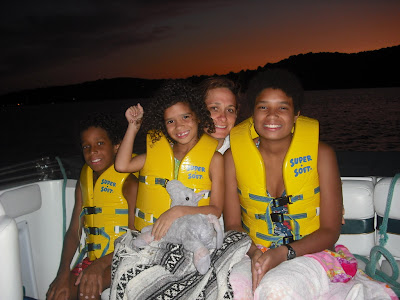 I've said it a hundred times. I have the best friends in the world. And lucky me, I have room for more. Life is good. (Complete photo album here)

Whopper of a vacation that!