I keep an edge of "buyer-beware" about myself for the most part...especially when it comes to food. I know that the labeling tends to exaggerate claims of healthfulness or fabulosity. And I believe that it's the consumer's job to know the facts and to make decisions based on knowledge and experience.

Where is she going with this? 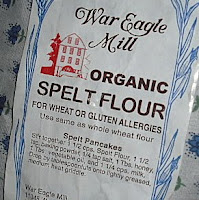 The spelt flour! When The Poet told me that his aunt had bought me a package of spelt flour, I was quietly appreciative, thinking that spelt was a wild form of wheat, and though it has less than its domesticated counterpart, it still contained gluten. When I next saw The Poet and I was given said flour, it was marked "For Wheat or Gluten Allergies" so I just figured I had confused it with one of many other grains available from my friendly natural grocer. And I was stoked to have a new flour at my disposal.

Saturday morning we gleefully enjoyed maple blueberry muffins. They were hearty and wheaty just like I love. And Saturday night, I was whining to Audrey that I felt "gluten bumps" developing -- a telltale sign that someone had snuck wheat into my food. I figured there were trace amounts in some chips or crackers (and I was irritated that I hadn't caught it on the labeling). Sunday morning...spelt pancakes. They were fabulous. Rave reviews from the whole crew and I enjoyed 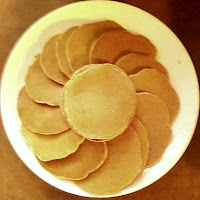 more than a few topped with freshly made blueberry sauce. And Sunday evening...more gluten bumps. A bit later, Big Sis made a comment on my facebook picture of a Svelte Spelt Flour Flower, saying, "You can't have spelt, can you?"

And I put all of the pieces together.

A quick google search told me what I thought I previously knew but dismissed based on packaging. Spelt is a wild wheat, and though it contains less gluten than its domestic counterpart, it is not safe for celiacs or those sensitive to gluten.

I guess, "For Wheat or Gluten Allergies" means that it will cause them.

Coincidentallh, I was at War Eagle Mill on Saturday. Lying bastards.