There are a lot of benefits to reuniting with old friends. Tonight I took advantage of one of those. Last week, shortly after Wasabi and I reconnected, he and I shared a quick text exchange about what was for dinner. I remember that he won by a long shot, making white chili for his family. I think I concocted some odd variety of bean dip that Martin usually makes for the kids. Acceptable in the eyes of my children. The budding dietitian in me...not so much.

And tonight, after a rather off-kilter day of studying (more or less), I realized that once again, I needed to feed the young 'uns. Last night had been a complete dinner fail. Em had leftover real deal mac n cheese; Isaac, a hot dog; Audrey, pasta with red sauce and I ate an entire jar of kimchi (hardly holding to my I'm not a short order cook mantra). Taking into consideration the many likes and dislikes...okay, mostly dislikes...with which I contend, I was at a loss for this evening's I-must-do-better meal. While I wandered through the massive grocery store, I remembered Wasabi's successful dinner. Consider it done. I had earlier noticed that skinless boneless chicken thighs were on sale (um...Jen...that's meat), I grabbed a few cans (seriously, Jen, you didn't cook them from scratch?) of white beans and was on my merry way. The rest of the fixins are pantry standards at Casa del Mar.

Or so I thought.

First step: saute the onions. Naturally, I only had red onions today. I had to giggle. Maybe it would be pink chili. I mean, I'm not feeding royalty or anything 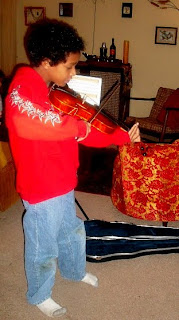 ...and I had yet to announce the dinner menu on the marquee in front of the house. Really, when it comes to food, the concept is all that's needed. From there, I'm happy to experiment. So I'd already thrown in my towel for it being truly white chili. Good thing. My seasoning choices tended toward the more rosy shades as well.

And as a bonus, while I was cooking, Isaac pulled out his violin and began practicing. Remarkably pleasant for having only played three months. And rather heartwarming to boot.

In the end, the kids were satisfied. Not too meaty for Audrey, not too vegetable-y for Isaac and not too spicy for Emily. And for me...an excuse to enjoy avocado and Sriracha without pushing it on the kids.

And I finally have something to blog about other than love, or lack thereof. A dinner victory and then some...popcorn! (Audrey added that. Gotta go...make popcorn)

ahh, but a lack thereof does not truEly exist. :)

Some kind of Jennifer said...

You're right. I have absolutely no "lack thereof." Thanks for the reminder.