As I've expressed a few times recently, the divorce has taken a toll on the kids far greater than its impact on me. I don't think anyone could deny that I'm thriving in a multitude of ways since stepping out on my own. The kids...well...let's go ahead and rethink their suffering a bit...

Not much more than a year ago, Emily, Isaac and Audrey lived with two disconnected parents in one house that wasn't so much built for five. Sure, everyone fit and no one was sleeping on the floor, but the children, all three, shared one bedroom. They did enjoy a small basement play area, but the sleeping quarters left much to be desired.

When I found my way into Casa del Mar, Isaac managed his own room and the girls shared one that was a smidge bigger. In the meanwhile, Martin carefully jumbled living arrangements and each child scored their own room at his house. As of today, a year (and more than a few hours of bickering) later, I am finally splitting up the girls, having concocted a makeshift bedroom in a corner of the basement for Em.

This new bedroom is a surprise. Emily turns 14 today. Yes. I said it. Fourteen. She's been exhibiting teenage behaviors for some time now, but in the last few months, the fussing between she and her sister has been nearly unbearable. I feel a tinge of guilt knowing that my "gift" to Em is probably as much a gift to myself as well as Audrey. Heck, Isaac will certainly benefit as well. The less angry estrogen filling the house...well, you know the old idiom.

So in just a couple of hours, Martin and the kids will come over, they'll enjoy birthday cake (I made it with gluten to keep myself from eating it) and then the big reveal. I don't have a backup plan in case of a negative reaction, though I did buy one helium balloon. She could always suck out the air and speak in a squeaky voice for a few seconds...

From one bedroom to six in 13 months. Poor kids. 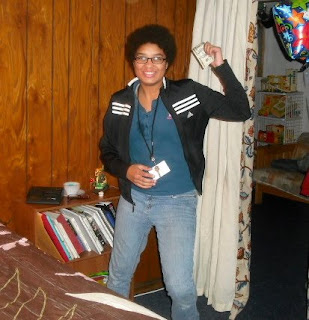 P.S. It was a big hit. Harmony is restored to my world...if only for a few days. And I'm quite content to take each and every one of those lovely days (or moments, if that's all I get) as yet another gift.

Looks like a great place and she looks delighted! Can you believe how close we are to having adults as children? So far the teen years have been fairly smooth in our family (well, we do have the occasional day or two of hormones), but we will see what is to come!