Taking It on the Chin

Last Sunday was one heck of a day. In addition to the emotional hit of the break up, I also took a physical beating...at the hand (ok, wheels) of Viv.

Initially, I just had a slight gash under my chin and soreness at my temples along with a couple of cuts on my hands. Later that night, I noticed I'd skinned my knee too. Monday, however, I woke to see quite a bruise overtaking that gash, plus sore shoulders, and by midday, a breathtaking headache. Concert Katrina managed to massage out some of the hurt, but only the passage of time would allow for the remainder of my recovery. 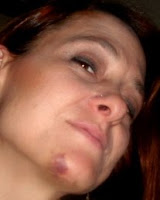 As the week progressed, the achiness subsided for the most part. The headaches lingered a little longer, but the mark on my chin only grew angrier. I found myself defending against well intentioned smudge-wipers and was unpleasantly surprised each time I passed a mirror. Yet, just as I proudly wore my very first black eye, I also have an affection for this bruise. It finally appears to be fading but will likely take quite awhile to make its final exit.

Now, don't think for a second that this will keep me off my sweet scoot. If I've learned anything in the last year it would be to get back in the saddle, no matter what throws me off.

Brace yourself...here comes the metaphor...
(Insert other big event of that day here)


I know I won't heal instantly. But each day the wounds hurt a little less and are not quite as obvious...though I might earn scar or two from the hit. I don't regret for a second the decision to take that ride -- it was exhilarating and beautiful and a joy...until it came to its surprising end. Like so many other hurts I've experienced, this one hand delivered a lesson that I can take or leave. I think I'll take it. It would be a shame to waste such a great learning experience.

And I will definitely give right turns the respect they so deserve.