You Call it Autumn...I Call it Fall 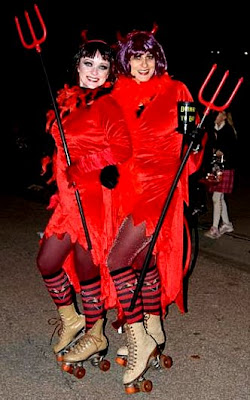 First things first...All Hallow's Eve. Tradition prevailed and the kids and I along with The Poet and his Emma went to Chez Diggs for food, fun and frivolity. Though for the past three years, Mrs. Diggs and I have paraded as Mad Housewives of some variety, this year, we donned our roller skates along with horns and pitchforks, claiming to be Hell on Wheels. Surprisingly, we made the entire night of trick or treating rolling about. The weather was spectacular and the kids had a ball. Each of us wiped out only once -- she, transitioning from grass to driveway and I, while standing in a neighbor's foyer...just fell down, knocking off the light switch at the same time. If I'm going to fall, I might as well make a production of it, right?

Other pieces parts of life have me a bit uncomfortable in my own skin. I'm already growing weary of this whole self-discovery thing. Each day seems to uncover another trait I find undesirable. What gets changed...what merits attention...what stays under the label "quirk"...what's a girl to do? Perhaps start by admitting she's not a girl anymore...

So today after several hours of wallowing in self pity and misery (and a bout or two with that leaking eye phenomenon), I realized that it was a beautiful day for a scoot -- very likely the last of the year. I painted on a reasonably happy face, concocted an errand to run and rolled Viv out of the garage. She was stubborn about starting as it's been well over a month since we hit the streets, but managed get her motor running and we headed to the...well, not highway...Roe Blvd. actually. A slight chill in the air along with bright sunshine proved a quick cure for my blues. I stopped to purchase a music book for Isaac's violin class and 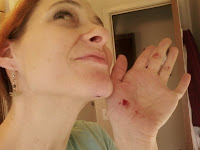 figured I should find my way back to Casa del Mar to hit the books. Three blocks from home, I took a right turn and before I knew it I was closely examining the asphalt. My first ever wipe-out. Turns out, autumn leaves that accumulate by the side of the road provide very little traction. Viv looks pretty good. The friend from whom I purchased her had taken a similar spill -- that time it was sand that had built up at a corner -- so she was already a little scraped up. As for me...I banged up my hand and took a fairly jarring blow to my chin (my jaw clicks now...do you suppose that's a bad thing?).

I'm okay with metaphorically falling down my own rabbit hole of self-discovery, complete with strange characters and interesting new finds, but I really could do without the physical impact of my arse to the floor and my face to the pavement. I'm getting the message...no need to pound it in further, Universe. Thankyouverymuch.

Love the costume!! Bummer about the scooter wipeout...