Took the Words Right Out of My Mouth

After much deliberation, I decided that the best way celebrate the end of finals week and earning straight As for a 2nd semester in a row was with a trip to the emergency room.

...because a martini seemed so cliche.

I met Wasabi Monday evening for a celebratory cuppa green tea to cap my semester and toast those hard-earned grades. As the evening wore down, something rather odd happened. I couldn't talk. Why, yes, Jennifer. That is odd... I was actually unable to speak. Thoughts were in my head, yet mush was coming out of my mouth. After the first try, I just laughed, not realizing that something might actually be wrong. I giggled over the silly sounds then tried to form more words. Only garbled consonants came out. Before long, Wasabi began pressing me to let him know I was fine. I tried over and over to say nothing more than, "I can't talk," but it wouldn't come out. After much labor, I finally emitted enough sounds in sequence to convey the thought. He had heard an article about strokes on NPR that morning so after much kicking and mumbling on my part (including the statement, "Dis wih make a great bog...I mean bog...ugh."), he dragged me to the hospital. By the time we arrived, I was able to reasonably communicate. My speech was labored but understandable. And while I desperately wanted someone to tell me that there was no reason for me to be there and that he was overreacting, the response was quite the contrary. Admit nurse: "It was probably a good idea you came." Triage nurse: "This is very concerning. He's going to get to say 'I told you so' more than once." Doctor: "You don't mess around with symptoms like that. It's good that you're here." 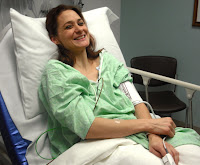 So for the finale of my Second Semester Culmination Celebration, I donned a lovely sea foam green gown, participated in voluntary blood-letting, got EKG'd (all the cool kids are doing it) and was exposed to alpha, beta and gamma radiation in my first ever CT scan.

Diagnosis: this was likely a mini-stroke. Doctor's orders: Follow up right away with a neurologist. No more exercise until further notice. And drop everything and get to an ER if there are any similar symptoms.

I feel fine now. I'm in the throes of acquiring the follow-up care that is warranted while getting a first hand lesson in why health care reform is necessary, yet probably won't work (another bog for another day). For now, I'll try to lessen my risk of recurrence by quitting smoking, giving up junk food and (when permitted) starting a fitness regimen.

Wow. That was easy.

WTF!?!?!?!?! DUDE, you or Wasabi call me if you need anything, ok? I am going to be worrying about you because that's what I do. I hope everything is OK and I love you!! Plese take care!

I can highly recommend Dr. Sharon Lynch at KU Med...she's an outstanding neurologist.