Through the magic that is facebook, I've reconnected with several high school friends. More than twenty years after the fact (can it possibly be that long ago?!), Lynn posted an album with some school photos as well as pages from the book that we all took home after our senior night -- including the class will and prophecy among other things.

I vaguely recall participating in the preparation of the booklet. The credits list me as having helped design the cover, and I remember wishing to be reasonably polite when it came to the will, but looking at it now, I'm unsure how strong my influence might have been. There were a couple of real zingers, including, "Can you imagine [insert name here] without a hickey?" I perused the pages, giggling at some memories, and completely lost with others. (I'll play the "brain damage" card for those fuzzy remeberings.)

Anyway, the will stated I would "donate my boyfriends -- all 100 of them" -- to one not-so-social underclassman. I didn't have a boyfriend at anytime during my senior year. But...I did show up to every dance with a different guy. I was apparently not girlfriend material, because once J.R. (yes, I dated a guy named J.R.) and I broke up at his junior prom (because I hadn't gotten over Brent, but Brent already liked Stacy and by the time I wanted to get back with J.R., he had a thing going with Lisa, and then I was heartbroken all over again), I don't recall ever again having a steady. I was usually relegated to the role of my best friend's sidekick -- the gal who got to go out with her boyfriend du jour's friend. Good times...(?)

But on to bigger and better things...

The class prophecy turned out to be mildly prophetic. It predicted that, first off, my driving had not improved (was I that bad?), but was not an issue because I was walking a college campus as a professional student. It claimed I changed my major as often as I changed my hair and was still in school. So twenty(some) years later, here I am...a different hairstyle (just say "no" to perms)...and a different major (in my earlier years of college, I declared at least three separate career intentions)...and still in school. 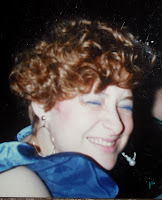 I was surprised to be reminded that I had been voted by the class "Best Hair" (I think because it varied dramatically many times that year), "Most Revolutionary" and "Best Personality." Ohhh, and one writer decided it unimaginable that I might be a wallflower. I don't recall being a terribly boisterous student, but perhaps I stood out from the crowd back then just as I like to now (but this time around I'm the middle aged gal in class who blames her mistakes on a stroke).

So maybe the spunk that I currently embrace (and thought was new to me) has been around for a long, long time. I'm reasonably sure that it was stifled for several years while I was in the throes of making and nursing babies, but I could be mis-remembering again. In any case, it's good to be reminded that I didn't blend in then and I certainly don't want to now. I wonder what the Class of 2011 will think of me...

Labels: Me Me Me

OMG....I have sooooo many photos that look just like that. I must dig them up and share.

BTW, check out this cool site I just found. It's internet radio on nutrition. Sooo cool!