waI don't watch sports anymore. Since moving out on my own, I haven't had cable and have watched maybe an hour of television in my home. I don't follow them on the internet. My preferred media source is NPR, which as you might imagine offers minimal athletic coverage.
You probably have noticed there is a big tournament going on right now. March Madness is what I believe some folk call this phenomenon where people [hope to] follow their favorite teams through a bracket until they reach the National Championship. Basketball, I think. Men's basketball.
You also might have noticed that I live in Kansas. And I attended KU 20 years ago. I didn't go to athletic events. I studied...a little. I worked...a lot. I didn't leave with a degree. In the years since, I have watched plenty of KU hoops, even had a little coming out of my own, celebrating their National Championship a couple of years ago. And once I was no longer living with a fanatic, I didn't put forth the effort to keep up with it.

Over the course of this season, I've heard buzz about the KU men's team and how well they were performing. But if you lined up several tall men before me, I wouldn't be able to tell you whether or not any of them play for KU, or any other collegiate program for that matter. I did assume that KU would make a pretty good run at the championship. That's what the experts said. I even glanced at a bracket on the night it came out and was happy to see that KU and Duke were on opposite sides of it. You see, my sweetheart is a Duke Alum. I thought it would be interesting to see who I'd cheer on if the two teams made it to the big game. Or if I'd cheer at all...

But the Jayhawks lost in round two.


So if I am to root for anyone now, I guess it will be Duke. If you've ever been in a relationship, you understand that your happiness often correlates directly with the happiness of your partner. Sometimes there are simple things that you can control -- a well-timed cup of hot cocoa or a back rub at the end of a long day. Other times it's a little more out of your own hands -- a raise at work or a victory by one's alma mater.

No one owns the monopoly on my loyalties. I will cheer for whomever I see fit, whenever I see fit. If I wish to watch only one game a year, that is what I'll do. If I choose to become a rugby fanatic and immerse myself in those happenings worldwide, I will do that as well. To think that my support for one athletic team or another makes an iota of difference in this great big world of politics, religion, technology, war and hunger is an absurdity. If by donning a Duke sweatshirt, I offend you, well, don't look at me. 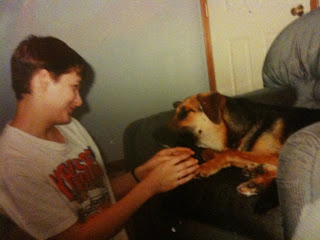 And because The Ex- has gone so far as to threaten that if I wear said shirt he will publish unflattering photos of me in my former life as, well, his wife, I will cut him off at the pass. Here you go. This is me 17 years ago. Wearing a KU shirt. Just remember, Mr. X, you thought I was attractive then.

I'm just glad to finally know who the Blue Devils are!

I guess the fact that I also mostly rely on NPR for my news explains why I am always the last one to find out who is playing in the Superbowl. This year I actually had to call my dad to verify that the Saints were in the Superbowl, because I didn't believe it when I heard that news on NPR (as more of a human interest story, than a sports news announcement).

You definitely were attractive then. Still are.