My charm bracelet is as precious to me as any item of jewelry I've ever owned. I began piecing it together shortly after Mr. X told me his half of our marriage was over. Cleaning out a closet one day, I found the bracelet I'd purchased more than a decade prior, only to realize that I had no idea how I would now adorn it. Not a single idea. My identity had become nothing more than wife/mother and I couldn't think of any interest I had outside of...um...I couldn't think of anything.

I issued myself a personal challenge that day. I would find the Jennifer I had once been...or perhaps the one I wished to become.

It's been a couple of years, and while I have the rest of a lifetime to fill it, it's no longer the anemic chain it once was. Many of the things I cherish are symbolized -- my friends, my children, school, yoga and running, heck, even Viv is on there. And while I wanted to find something to represent Mark, I couldn't think of anything to dangle from my wrist that would be distinctly identifiable as him. Until I could come up with something just right, my birthday month charm from two years ago served as an umbrella under which he was covered.

He and I play Lexulous -- though "play" might be too weak a word. Sometimes we might have time to only take a few turns over the course of a day. Others we'll sit side-by-side, each with a laptop warming our legs, playing word after word. The competition is fierce and fun. Heck, part of the reason I bought an iPhone was so I could play while away from a computer. 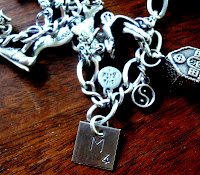 I needed to find a letter tile charm. After much searching, I found an artisan on Etsy who agreed to make exactly what I had in mind. And within a few days, Mark held a permanent spot in the miniature gallery of my favorite things.

Because I can't even draw a stick figure and don't begin to understand how artists see the world, I often forget how important creative folk are to the rest of us. I'm perfectly content in my world of chemical reactions, microbes and well researched theories, but my life would most certainly be lacking without the inspired contributions of friends, family and others who march to the beat of a different drummer.

Or maybe mine is the different drummer. I mean, really, who can't draw a stick figure?