The same two books are on my bedside table that I last cracked in January. I subscribed to three magazines over the winter break (Amazon had some mad-hot deals) and have barely given them a glance. This semester has kicked. my. ass. Notice I didn't say arse. This was a full-fledged ass-whooping. The semester made me its bitch. I was rendered nearly useless at the hands of sixteen credit hours. I cannot believe I'm still alive (alright...now I'm just being ridiculous).

For a control freak like myself, this has been a lesson in the making. I say that because I fear the lesson is not yet complete. The next summer, fall and spring will likely unfold with more than a few surprises and throw-downs. But at the end of this seemingly unending tunnel is a thin little piece of paper upon which I will build my career.

So while I'm not really fully understanding the implications of the end of the semester -- really, I don't have to study tonight? -- I can see the bigger picture. I'll start again in a few weeks. I'll be driving. A lot. I don't know where the money will come from. I don't know how I'll pull it off, but I know I will...and I will do it well. And even if each of the next three semesters kicks my ass just like this one did, I will have kicked my old life's ass by the end of the journey. I will have proven to myself and any unbelievers that I can be anything I want to be -- ok, maybe not an NBA player or a ballerina -- but I will have far surpassed the expectations of many who knew me way-back-when.

And once I finish that internship, I'll throw a couple of initials at the end of my name. Jennifer Diggs, R.D. I like it. I like it a lot.

I don't think I've ever posted something that wasn't mine. Until now. This is from a collection of quotes my yoga class submitted to the instructor. Today she sent out the compilation. I barely scanned the long page, yet this one demanded my attention...and continues to hold it.

The Journey
One day you finally knew what you had to do, and began,
though the voices around you kept shouting their bad advice-
though the whole house began to tremble
and you felt the old tug at your ankles.

"Mend my life!" each voice cried.
But you didn't stop.
You knew what you had to do, though the wind pried
with its stiff fingers at the very foundations, though their melancholy was terrible.
It was already late enough, and a wild night, and the road full of fallen branches and stones.
But little by little, as you left their voices behind,
the stars began to burn through the sheets of clouds,
and there was a new voice which you slowly recognized as your own,
that kept you company as you strode deeper and deeper into the world,
determined to do the only thing you could do- determined to save
the only life you could save.
-- Mary Oliver

No Numerical Specifics, but...

Happy Birthday, Wasabi Boy. I love you.
Posted by Some kind of Jennifer at 12:01 AM No comments:

Do You Know the Muffin [Wo]man?

I'm pretty picky about my chai tea. There's only one restaurant that serves it to my liking...and of course, I tend to overdo it when I'm there. But good chai is, well, oh-so-good. A few months ago, Mark started making his own chai, and naturally, it is now my favorite.

About a week ago, we were making dinner, including our favorite rosemary rolls, and I noticed a link to a recipe for chai mini muffins. Now, if you've had more than a couple of playdates with my kids, you've likely tasted one of many varieties of muffins I enjoy making. Pre-gluten-free days cemented my love for the sweet snack, and though it took some coercing, I came to my senses and re-started the weekend tradition of muffin morning after several wheat-free months.

This morning I decided to try my hand at chai muffins. The recipe on the link was unimpressive, using a store-bought flour blend as well as pre-packaged chai tea. So I looked over the notes I took last time Mark made his chai, grabbed the spices and started mixing.

I didn't expect to be terribly successful on my first go-round, but I'm pretty pleased with the results, as are the kids. So while I know my gluten-free audience is, well, probably non-existent, I'll throw this out there. I guess you could sub all those silly flours, starches and gums with a couple cups of whole wheat flour...but what's the fun in that? 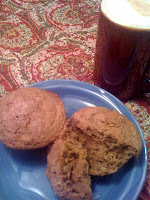 The Fabulous Kristen told me I was fired for calling myself that. I've become a ridiculous rhymer -- micro lab apparently lends itself to verse . My Weak Streak Technique became Freak Streak Technique after considerable practice (clothing remained intact, but millions of bacteria were propagated in the process). And one day the Bunsen burner and Miss K, well, I only can blame the lame flame... Sorry. I guess my brain is feeble and reverting to its childish ways. And much like I felt toward the end of the last term, I am in a state of aaarrrrggggghhhhhh!!!!! right about now.

A couple of weeks ago, my class in Warrensburg wrapped. Today I took the final (for a mere 90% of the grade) in another. After Monday, micro lab will be nothing more than a memory and a Gram stain splattered lab coat. But my next two weeks still hold eight tests -- two of them in that darn chem class that has pushed so many of my buttons for the last 15 weeks.

So as of right now, I'm holding a twelve-hour "I'm not going to study anymore" protest. But I don't think anyone will notice. I doubt policies will change. I probably won't make the news. But I won't crack a book. I won't sequence any DNA. I won't type any blood. I won't even think about the twelve steps of bread baking.

Oops, let me correct that...it will be a ten hour protest...I'll be back in class by 8 a.m. Some might call it sleep, but, well, I don't roll like that either.
Posted by Some kind of Jennifer at 9:54 PM 1 comment:

Seems I have a propensity to ramble. I'm unable to let a quiet room be. And that whole short-story-long superpower I posses, well, I only use it for [what I deem to be] good.

By the middle of the semester at yoga (yoga for college credit!) a few of us would chit-chat before class began. Occasionally someone from the perimeter would add their two cents. This, of course, was a clear indicator that everyone was listening to me and truly valued my, er, um, wisdom.

I've really enjoyed getting to know some of my classmates. Most of them are barely out of high school and have the sweetest lofty goals. I'm excited for anyone who has big dreams -- that's what I was lacking in my youth.

One especially sweet gal and I talk before class nearly every day. She isn't particularly set on her life's ambition. She's finishing her A.A. in something along the lines of retail management and is climbing the ladder at a major chain, but...turns out she kinda sorta wants to be an art instructor someday and feels lost without an art class in her schedule.

In all likelihood, a good percent of these gals will eventually go through something similar to what I have. After five, ten, 15, maybe even 30 years in a committed relationship, something will go awry. And maybe they'll think back to the crazy middle-aged lady from yoga class and realize she wasn't so crazy. And because they were younger and wiser than me and finished their college degrees, they will have that Plan B in their back pockets and they will pick up the pieces of their shattered lives quickly and painlessly and simply move on.

At the very least, perhaps a couple of them will think twice before they adopt a dog with their boyfriend.
Posted by Some kind of Jennifer at 7:29 PM 1 comment: