Nobody's Gonna Rain on My Parade

I just had one of those "So that's how crazy I am" moments. I checked my marathon training schedule. Yesterday I ran 15 miles (my farthest ever, and yes, I patted myself on the back). Tomorrow I'm scheduled to run six. As I glanced ahead, I had to giggle. There will be school days that I'll be out the door by 5:00 a.m. to fit in my run, shower and carpool (whoohoo! I have a summer carpool buddy -- and she's even a marathoner!).

Actually, it was yesterday that I confirmed that I-am-a-flippin'-lunatic. The morning started temperate and hazy, as ideal as it gets here in the humidity belt for a July run. I made my toward some pedestrian/biker trails a few miles away and did my best not to count each passing mile. By the time I'd gone six miles, I noticed some lightning in the distance. I'd planned a turn-around anyway and hoped my breath-taking six miles per hour could outrun the storm. Really, what choice did I have?

Another thirty minutes passed and I began feeling the occasional sprinkle. Then the drops grew bigger and more sincere. Those of us out for our morning exercise traded sheepish grins. Sure, it's raining, but we'll be fine, our eyes told one another. And we all continued our treks.

The steady rain continued and I passed my opportunity to cut my run short. I wasn't gonna let a little drizzle keep me away from my longest-yet run. Off the trails and into some residential neighborhoods, I noticed the skies getting progessively darker -- and louder. The rain grew heavier and once I reached my turn-around point, I realized that for the last mile or so, a fairly strong wind had been at my back. It was a little less friendly face-to-face, but I kept on keepin' on. A nearby lightning flash and less than a second later, it's accompanying thunder alerted me that I was in the thick of it.

So I decided to run home.

The downpour was unrelenting at this point. And I ran. I found myself giggling as my shoes sloshed through puddles and the water washed away my sunscreen. And I ran. Cars had stopped on side-streets because visibility was so poor. And I ran. Streets were nearly submerged. And I ran.

The last four miles went by surprisingly quickly. I wasn't unbearably hot, after all. I wasn't particularly thirsty either. I was running new parts of town. And I was cracking up.

Once home, I dripped in the the threshold for a bit, then assessed the damage. Knees -- fairly angry. Quads -- ready to quit. Lungs -- reasonably content. iPhone (music source) -- on the fritz.

It had just been exposed to the equivalent of a day at the dunk tank. But I'd witnessed the revival of the same model once before. My genius boyfriend keeps a plastic storage container with several recycled packets of silica gel in the kitchen cabinet (for a long time, I thought he was working on a quirky collection or maybe just had a thing for silica gel). After a wet winter run, his phone acted up and he placed it in there for a few hours. Voila! Dry, happy phone. 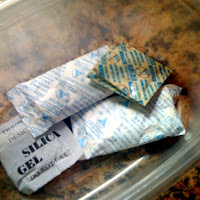 I grabbed the container, put the phone in and crossed my fingers. My patience was tested, but by this morning, it stopped flashing ridiculous messages and could be used as an actual telephone once again.

So next time you get a new pair of shoes, don't toss that little packet o' poison. Keep it, find it a few friends and the next time your small electronics are subjected to unreasonable humidity, give it a try. The phone you save may be your own.

Damn! And I just threw away some of those packets yesterday. But I'm so glad that your iPhone is working again! Beth-sey

I heard sticking it in the microwave works well too...

I once washed my phone in the washing machine. My nephew asked if I put it through the dryer. When I said no he said, "Maybe that's your problem!" Anyway the thing started working again after a couple few months. You must have felt like Rocky or Flashdance running through the rain. I haven't been to a real movie in so long can't think of any newer ones. Keep on dancin', er, runnin!