First off, carb loading is serious business! I managed about two days of it and (Mark will confirm this) after our (gluten-free) pasta dinner on Friday night, I was a jittery, energized mess.  It might have aided the run more had I enjoyed a solid night's sleep, but after a few hours of rest, my brain and adrenals went haywire so I excitedly watched the clock.  I guess it was about 5:30 when I rolled out of bed, enjoyed my favorite breakfast (steel cut oats, Greek yogurt with honey and walnuts, cappuccino) then Mark and I headed to the race.  Traffic on I-35 started jamming more than two miles before the recommended exit and I was relieved to not be at the helm. My downtown-savvy boyfriend navigated a superior route, we parked, then walked about 1/2 mile to the starting line. 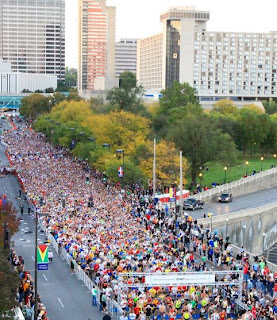 We warmed up a bit before I kissed Mark "goodbye" and each of us navigated the crowd to find our respective pace leaders. There were just over 1000 marathoners, and a zillion other folk (or maybe 9,000) running the half and 5K, along with a pretty good contingent of relay runners, so I kept my eyes open for the green bibs and nodded to them in silent camaraderie.  We were the rarest of the bunch.  Or perhaps the craziest.

The first ten miles were pretty painless. (My bruises from the crash had apparently surrendered to my obstinate nature). The pack was thick until the half marathoners split off so I made a mental note every minute or two to stay near my pacers.  (Those pacers are amazing.  They give up their own time for the sake of helping a bunch of mostly-rookies make the best of their own marathons.  Very. Very. Cool.) I occasionally had to remind myself  to enjoy the city on this lovely morning. Downtown Kansas City is a neat place.  I was especially tickled when we cruised a site from a very special first date.  A handsome fella earned his nickname there...

Somewhere between "Hey, this is easy!" and "Hmm, this is getting hard," I spied Mark's dad, Geoff and dog, Ella.  I jetted to the side of the road and grabbed a quick hug from one and patted the other on the head (you figure it out) and kept moving, only with a little extra zing in my step.  High-fives and hugs are as good as glucose when it comes to fuel (though I wouldn't want to go without either of them). 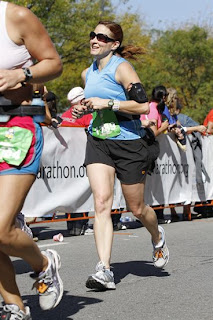 Just as promised, the run became exponentially harder.  I knew there was a pretty steep grade that built up from miles 21 to 23 and found myself fretting over that.  I was also starting to get a little loopy (and that's such a rare state of being for me).  The water/Gatorade stops that were every two miles guaranteed an audience of delightful volunteers, so I'd chit chat a bit as I walked through them (the only walking I did over the long course) (don't try to run while drinking from a paper cup) (I learned this the hard way during my first Hospital Hill run).  A sincere "thank you" might have been accompanied by a quiet "this is kinda hard," or "by the way, this hurts!" telling them as though it was a well-kept secret only seasoned marathoners knew.  I wove my way over to a spectator who reminded me of my mom, told her exactly that and thanked her for coming to the race.  I'd guess it was at about 22 that I felt a bit of an energy surge at the same time my iPhone graciously played Proud Mary. So I sang out loud, channeling Tina Turner while running.  Those antics might have bitten me in the arse only a mile or so later as I slowed to a walk to grab liquid refreshment at the next station and my legs turned to jelly.  I felt a bit wonky and realized that my body was starting to break.

I knew Mrs. Diggs was trying to make her way to my kids and then to the race in an effort to give me a boost sometime before the end of my run.  I was doubtful that she'd make it on time knowing her morning obligations and the distance she needed to cross, but was looking forward to seeing the crew as I rested my legs.  After I passed mile marker 25, I thought I would see that finish line any time.  I mean, what's a mile? Nothin'!  But that mile Dragged. Out. Forever.  And as I turned a slight corner, I spied a crew of lunatics that
could only have been mine.  First I saw Princess Pearl's long legs and a big bouquet of flowers.  Then I noticed waving swords and guns and lots of hooting and hollering  My friends and family had come to help slay my dragons!  I grabbed super-charged hugs and kept moving.  Mrs. Diggs ran with me for a bit then I got serious again.  The end had to be near, right?

Finally, I saw the finish line.  Up a hill.  Seriously?  I had to run up another hill to complete this?  I trudged forward with what little remained in my legs.  Surprisingly, I heard my name, looked over and saw a summer classmate who had run a leg of a relay jogging by my side.  Sweet Amanda put a pep in my step that I would have never expected at that point in the race.  I was giddy to have been given such a gift and crossed the line with a huge smile on my face.  I was done.  I slowed to a walk. 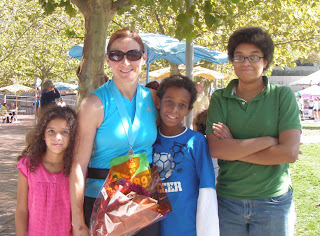 The slower I walked, the more I hurt.  I hugged Amanda goodbye and found my sweetheart who had finished 17 minutes earlier.  We were limpy, gimpy pathetic folk who weren't much for company, but my cheerleaders had joined us so we did our best.  I was pretty giddy having done what I'd just done.  Mark was a bit bummed by his time and had hoped to run a couple of minutes faster (though his Garmin indicated he'd run 26.45 miles, so I think he technically hit his goal).  We eventually headed toward the car, which was akin to a million miles away (didn't seem that far just a few hours earlier when we parked). 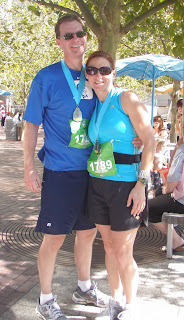 Getting in the car.  Ouch.  Getting out of the car. Ouch. Three steps up to the house.  Ouch. Ouch. Ouch. We each grabbed water or food or something (I don't really remember. The brain fog had settled in) and then we sat.  That was pretty much the theme for the afternoon. Mark's second-born stopped by a couple of times that day and seemed amused by our sloth.  The second time he popped in, we'd migrated from chairs to the couch. "Oh, you moved," he chided.  We deserved it. We'd earned it.

The ache has now faded, but the pride remains.  Mark's friend of many years, Ellen, (who I knew from spin class before the three of us connected the dots) has run more than her fair share of miles and reminded me more than once during training, "Pain is temporary. Glory is forever."

Or at least until the sticker peels off my window.

great story! Thanks for sharing!