I'd barely entered the office when a gal intuitively asked, "The Vespa?"

She directed me to a garage not far away.  I could see her green fender from across the lot and hesitantly proceeded.  Seated in a lawn chair, a dusty man smoked his cigarette and humored my need to say "goodbye."  I'm probably not the first gal with an attachment to (and a name for) her ride. 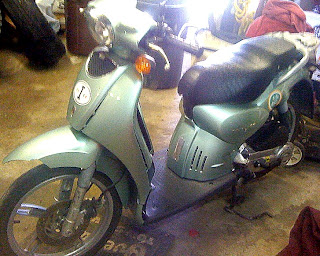 At first sight, she appeared to be in reasonable condition.  Her "trunk" had been knocked off, but she still looked like Viv.  As I got a little closer, I could see her front end was misshapen and the fender that I'd spied earlier was only half of one.  As I slowly circled her body, I noticed a missing foot rest, a dangling blinker, numerous scratches and scrapes. She was clearly no longer for this world.  My eyes welled with tears and I rambled a bit to the old man.  Before long, he knew that I'd given her to myself to celebrate the final year of my thirties, that her name was Viv and that she and I had shared an adventure or two.  He reminded me that those good times didn't have to end, that I could replace her. But  I shook my head in doubt. Call it being a chicken.  Call it PTSD.  Call it coming to my senses.  I don't think I'll do it again.

When I was presented the opportunity to buy her, I was wholly single and had the means (by miraculous happenstance) to purchase her.  There was no one whispering in my ear how senseless a scooter would be to a mother of three.  I'd lived so many years concerned with the financial uncertainties of Mr. X's career and worries about keeping food on the table that I rarely indulged in extravagances (the exception being kitchen equipment...All Clad makes me weak in the knees).  I did the numbers.  I checked with the insurance company. I bought her. And she became a symbol of my freedom.

She was my favorite study break.  She took me to stretches of road that I'd not before driven.  She made me feel like a million bucks.  Sure, she was there when I found myself face-first in a pile of muddy leaves -- and she tried to leave me stranded once or twice.  Plus she was a garage hog.  But I could overlook all of those shortcomings. She was fast, sexy and sassy.

Now that I've experienced first-hand how dangerous life on a bike can be (and am completely cognizant of how very, very lucky I am that it wasn't worse), I won't buy another.  At least not for awhile...

...because I have another favorite study break who takes me places I've not before experienced and he makes me feel like a million bucks too.  After nearly a year, he's yet to leave me stranded at Whole Foods and has resisted the urge to toss me face-first into a pile of muddy leaves.

And while I can't fill his tank on less than $3.00 a week, spending time with Mark doesn't require a helmet or liability insurance.