I don't want to say this running thing has come full circle as that might indicate that I've come to a stopping point, but I do feel like a few dots were connected this weekend.

About a hundred years ago (or maybe just two), Mark (who was Wasabi Boy of the friend variety at that time) ran the Gobbler Grind, his first half marathon.  I was very happy for him (and a little jealous of him and a little lonely for him).  A few weeks later while I penned a New Year's Resolution post, I was inspired to declare my intention to run a half as well.  And Casey chimed in that I should shoot for Hospital Hill.

This year while I was training for the full marathon, Casey kept me apprised of her increasingly severe addiction to running.  The day she announced she'd hit the 13 mile mark, I suggested she and I run the Gobbler Grind.  It would be a great excuse for us to reconnect after more than a year and a reason for my legs to keep going post-marathon.

So she returned to her old stomping grounds on Saturday with her two youngest in tow. The magical friendship that links our families has no regard for time.  While it had been more than two years (and several inches) since the kids had seen each other, the reunion was nearly seamless.  She and I fell into our own  comfortable rhythm too, excitedly discussing the next day's run.

We picked up our race packets, made dinner and enjoyed a nightcap with Mark (she approves).  The bedtime ritual was almost exactly as complicated as expected.  The kids showed no signs of slowing, but we knew we needed our sleep.  Play ceased temporarily while air beds were assembled...and one subsequently broke (the blower on my aerobed now sounds like a metal spoon spinning in a garbage disposal). The kids didn't care and we were growing weary enough that we didn't sweat the details either.  Kisses were distributed among the children and Casey and I quickly wrapped up our evening conversation (about 45 minutes -- our fastest time ever!).  A few hours later, my youngest took over my bed and hers commandeered the couch. The alarm clock was hardly as jarring as the pointy toes in my ribs, so I gladly rose to meet the day. 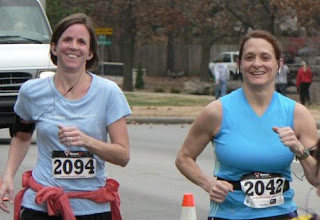 Greek yogurt with honey and walnuts made for a fine breakfast, as well as every runner's best friend, coffee.  Before long, we were out the door and on our way.  I was very excited to share her first half.

Her mom and nephew saw her off at the starting line, and Mark greeted (and photographed) us periodically along our journey.  The first several miles were somewhat frustrating with narrow paths and no pace groups.  Lots of weaving stole much of my energy, but I held out hope that I could top my fastest half, if for no other reason than the lack of dramatic hills on this course.  Casey's goal was to cross the finish alive and faster than at least one other participant. 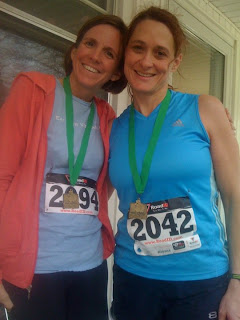 While it holds no statistical significance, I did beat my time by fourteen seconds.  Then Casey finished alive and preceded a good portion of the pack.  I found Mark and Casey after the race -- two of my favorite people, two of my favorite runners, and two wonderful reasons I love running.

I'm pretty sure these two inspirational folk have a races left in their legs, and I hope they'll keep encouraging me to keep on truckin' just as they have in the past.   Running is by far my favorite source of sanity in an otherwise ridiculous world of homework and parenting and insomnia.  And while I'm not yet ready to give up  the homework, parenting and insomnia, there aren't medals given out at those finish lines.  Heck...I don't even think those have finish lines.

You are my hero! Way to PR in a half just a few weeks after a full! Who does that?!