Parenting was meant to be a tag team event.  While the busy schedules of the two might collide now and then, for the most part, between a pair of capable adults, the needs of their children can generally be met.  In the same vein, it's nice to have another on your team when you're wiped and frazzled and done.

That's how I always feel by dinnertime on Sundays when I've had the kids for five consecutive days.  It's not because I can't take the kids any longer -- it's that my kid-friendly menu ideas have been depleted and I just don't know what the heck to make. 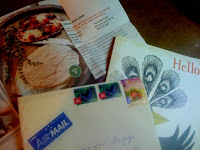 Tonight I fell back on an old standby, pizza, with yet another attempt at passing off a gluten-free crust as an acceptable surface for their own topping choices.  Last weekend, Gillian, Mark's sister, sent a clipping of g.f. recipes from her local (Sydney, Australia) paper.  Lemme tell you, it's awesome to get personal not-bills mail, let alone airmail with cool stamps from an exotic land.  Add to that fresh and fantastic recipes (including one for pizza bases)...that'll put a smile on any girl's face. I tweaked the recipe a bit for nutrition sake and of course, had to put my handy dandy metric conversion skills to work. That very night, I made pizzas for Mark and I with lovely results.

Tonight's pizza was a big hit. A neighbor girl was over and she loved it. Ike and Princess Pearl both raved. (Em had slipped into a coma-like nap -- she's a teenager after all.)  After the crusts were par-baked, I made a simple red sauce and put out veggie and meat and cheese options for each child to assemble their own pie. A little more oven time and dinner was served.  They were fabulous enough that we had to make an additional one for each kiddo. A unanimous I'll take seconds stamp of approval is a rarity.

So while you may not see much use for a g.f. flatbread recipe in the near future, I'll share my creation with you anyway.  Perhaps you'd like to invite me over for dinner.  P.S. I especially like caramelized onions.

Preheat oven to 425 degrees F. Combine dry ingredients in a large mixing bowl.  Add water and oil and blend with an electric mixer for about 5 minutes at medium speed.  It will be a fairly runny batter.  Line a  baking sheet with parchment paper or a Silpat mat and spoon on circles of batter, spreading them into circles (or ovals or hexagons or...)  I fit between three and five per sheet depending on size of pan and circles. Bake for 15 minutes then remove to cooling rack for a few minutes.  Top with desired toppings, return to oven for 7 to 10 minutes.  Remove, enjoy!

I used parchment on one pan and a Silpat on the other. Because of the high moisture content, the parchment ones got wrinkly on the bottom. 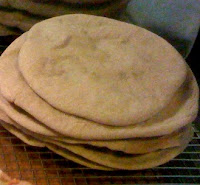 No biggie, but the Silpat ones were gorgeous. And after the first round, I decided to bake the topped crusts directly on my pizza stone.  That was a good decision.

I have the remaining crusts in the freezer now.  I'm excited to come home from school with a grumbling tummy and satiate it with something much more clever (and tastier) than a chocolate rice cake.

have you tried pamela's gluten free brownies? they're better then the 'real' ones :D the flat bread looks great...