...because for every sacrificial chipmunk, there are at least three roundups. 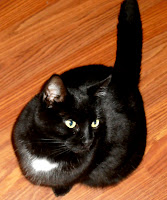 I know I'm not the only cat owner who regularly experiences The Food Chain: Live and in 3D, but I do believe that Charlie is an overachiever of sorts.  The time she delivered two [dead] baby bunnies and placed them parallel to one another on the back door mat (the day after Easter, oddly enough), I knew I was contending with a hunter of impressive ilk.  Since then there have been rabbits too numerous to count, mice by the dozens, and birds of many a feather, in varying states of living brought to and into my home.

The Chipmunk Roundup is a relatively new activity at Casa del Mar. I suppose we had our first rough go at one in late spring of last year, but had perfected it by fall.  While most nine year old girls might be frightened (or delighted) to find a living, breathing chipmunk in her room, Princess Pearl now sighs in exasperation and then loudly announces, "Chipmunk Roundup!" This is a family event, after all.

Through trial and error, we have developed a patent pending technique that is as follows: Upon the sounding of the alert, doors are closed to all rooms which are known to not harbor said chipmunk. A ruckus is then made in the remaining room and generally within a minute the offending rodent has exited to the hallway. Easily persuaded from the hallway into the main living quarters, the we-added-this-bifold-shuttered-door-to-this-awesome-mid-century-house-when-we-remodeled-in-the-seventies door is closed and the chipmunk is now carefully quarantined in the living room.  One child is charged with opening the front glass door, while another is put on guard between the kitchen and living room (great open space for entertaining, but a slight challenge for Chipmunk Roundups).  At this time, the rodent has typically hidden behind the Chair of Fabulosity or another piece of discount (albeit similarly delightful) furniture. The cat is then introduced as a key player (don't fret, this isn't gory...usually) who can sniff out said visitor, sending it into a slightly panicked state that usually leads it to the great outdoors.  The front door is then closed, high fives are distributed and the Three Little Diggs return to their previous duties.

How do the chipmunks get into the house? Charlie brings them inside. But how? Her "cat door" (a window without a screen) which is left open during fair weather. So yes, it is easily be argued that Chipmunk Roundups could be all but eliminated. As would the family bonding that they induce.

So I'm keeping that window open again this spring...because at my memorial service, the kids will need something to talk about.