I don't know that I've mentioned that I've been working very part time at the Y lately.  Subbing for spin while my instructor was on maternity leave led to a couple of months of Monday nights at the front desk while two more gals were off due to the same condition, and as a result of getting chummy with one of the directors, I now will be instructing three classes permanently: Monday evening spin, Tuesday evening family yoga and Thursday afternoon youth fitness.

During those front desk nights, I was usually paired up with a sweetheart of a gal, Leah.  We hit it off from the beginning...then we realized that we both come from similar families (she was reared in a missionary family; my dad is a preacher), share congruent world views, but most importantly, we're both runners.  She's shooting for her first half marathon in a month and has been diligently training through this harsh winter (while I've found reasonable substitutes for cardio that do not involve dreadmills or trudging through the snow). She's now to those last few long training runs and suggested we run together.  While I've never really run with friends (with the exception of the first half of the Gobbler Grind and about half a mile with [super fast] Running Jamie one day when we accidentally happened upon one another), I thought it would be a great motivator  to tackle a significant distance and do something new and potentially fun in the meanwhile.

So this morning after I savored my yoga class, I bundled and geared up then met Leah for our joint run.  It was cold and windy, but the sun was shining so we were able to somehow justify the torment.  We went music-less for the first half, chatting here and there (mostly me yapping about food) and when we got to the five mile mark, we slowed for water, Gu, and opted to slip on our headsets. But her iPod battery was dead! I offered to go without, but she insisted at least one of us enjoy tolerate the rest of the run.  Luckily the wind was at our back at this point and we made the return trek with only the occasional grunt or complaint. 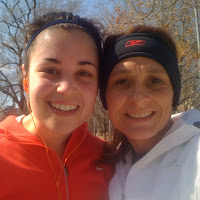 Her schedule called for ten miles, so we did it -- my longest run since November.  I never felt particularly strong, but never doubted my ability to finish either.  My legs certainly remembered what they can do (and also remembered to complain a lot for the remainder of the day) and I'm now excited for spring's fair weather and long weekend runs. I'll miss next Saturday with Leah (yoga instructor training), but will hopefully do twelve with her the following weekend.  I'm gonna let her Rock the Parkway on her own, but will definitely be cheering her on from the sidelines...

...in a formal gown and roller skates.

Umm... we didn't "happen upon" each other. I chased your ass up a hill and made you promise to be my friend.

So excited for you to teach yoga! Do you need the book back? I may or may not have quit JCCC yoga.