I have adhered pretty darn closely to my caloric intake goals, yet a week of daily exercise and [mostly] careful dining didn't pay off.  Well...I can't say that.  I still feel pretty darn good, I'm more aware of each morsel I put in my mouth than I've ever been, and this will certainly be a lesson I can share with my clients once I'm a dietitian.

I acknowledged last week that the nearly five pounds that I initially dropped were more than enough for that short span of time.  I'm going to let my body catch up to my efforts now as there is no intention on my part to falter from my [self] appointed mission. If I hadn't published my goals on my blog, however, I can almost promise you that after Week Two I would have bailed and would be sitting here with a carton of Jamocha Almond Fudge in my lap rather than a computer.

We touched a subject last semester in Advanced Nutrition and just a week or so later I heard more about it on NPR (referencing American's tendencies to gain very little weight over the holidays despite deserving to pack on the pounds).  It's called the Set Point Theory. Basically, it says that our bodies find a weight and really want to stay there. That's why you occasionally meet those annoying folks who complain that they can't gain weight despite their most valiant efforts and of course, the rest of us who wish to lose five, ten or fifty pounds and just can't seem to get over the hump.

I think I found my hump already.

Like I said, I work out daily.  An average week breaks down to cardio, strength, cardio, cross, cross, yoga, cardio. I would imagine that my hump is set pretty high and my body is going to be pretty pissy about giving up any more of that insulation -- just in case I forget to feed it -- because it knows I'm going to work out tomorrow, fueled or not. 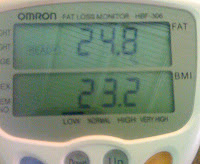 In the "good news" department, my fat stores have dramatically depleted from Day One.  As previously mentioned, my body fat percentage was 28.7.  It is now 24.8.  If the math isn't fooling me, when I started the diet (@146 lbs) I was lugging around 41.9 pounds of adipose tissue, and I now (@141.4 lbs) have 35.1.  Again, so long as the arithmetic is true, I'm gonna go ahead and declare these results to be awesome.

So I will keep on keepin' on.  My workouts will continue (though it might be time to take them up a notch) and my food diary will remain a part of my daily life.  I'm determined to be a hottie under my graduation gown on May 7, and if I gain a fabulous "If I can do it, you can do it too" story along the way, all the better.