As we said our goodbyes the 2011 Hospital Hill half marathon, Mark and I agreed that it was probably our last. He's run it twice, me, three times. And while for me the first year was absolutely magical, the past two (which I dragged Mark into) have been anything but.

Like last year, the heat was oppressive.  At the 7:00 a.m. start, it was 80° and 70% humidity. But I went in feeling like I was well prepared to PR (personal record) as my average time had improved by more than 30 seconds per mile. I was determined to stick with the 2:00 pace group regardless of pain or exhaustion. And I did. For about three miles.

Then I had to pee. And there was this hill. And the pacer really sped up. And. And. And. By mile five, I wanted to quit. Really. I really, really wanted to walk away from the miserable morning to which I had subjected myself. And then I was really, really bothered by those thoughts that were so uncharacteristic of me. After a way-too-long portapotty break (a line three deep and I swear, the others had forgotten that they were running a race!), I kept moving forward, knowing a PR was well out of reach, but really, unless heat stroke or a broken leg took me down, I wasn't about to allow myself to quit.

It was a long haul, but not terribly lonely. A gal who has taken some of my spin classes caught my attention and we chatted (read: complained) for awhile. I grabbed a high-five (they provide about fifty yards of turbo boost) around mile nine from another Y acquaintance. And Mark's son was waiting at mile ten with an icy washcloth and a big bottle of Gatorade. At that point I was just putting one foot in front of the other. I was hot and miserable but didn't doubt my finish. Crowd support was good, but not entertaining enough to make me leave my sorrows by the roadside.

Finally I turned the corner that foreshadowed the last beast of a hill before a long downhill slope to the finish. I maintained my jog up the hill and just as I crested it and wanted to let momentum carry me downward, my stomach started turning. I couldn't give any more power to my legs as I was using it to keep my wits about myself. The 2:15 pacer was teasing me to beat him in that last long half mile. I'm not sure if I did, but I finished. 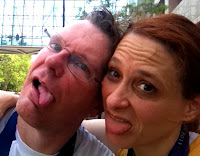 I grabbed a water and my medal and soon found Mark. He beat my time by a potty break and about three minutes. As we limped back to the car we expressed our lack of enthusiasm for running Kansas City's hills in June. I remarked that I hadn't gotten an exercise high in quite some time. He replied, "Well, it's 'cause you're in love." 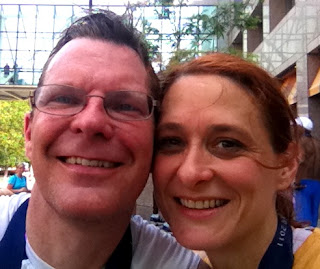 And that's when it all added up.  Remember way back in the day when this blog was titled Exercise is a Reasonable Substitute for Love? Well, I meant it. And while I'd love to argue that exercise is a delightful compliment to love, I occasionally fear that love might be a reasonable substitute for exercise.

Naaaaahh.   I'll stick with the compliment version. I'm pretty sure I don't want to go on without one or the other.
Posted by Some kind of Jennifer at 9:15 PM

Fantastic post. And good job on the race! I battled that last hill too... brutal. But I bet you'll be back. :)